Star formation in the era of Herschel and ALMA: paving the way to JWST
The birth of Sun-like stars is a complex process where several physical processes are involved but whose respective roles are not yet clear. On the one hand, the young stellar object accretes matter from a collapsing envelope. The gravitational energy released in the process heats up the material surrounding the protostar, creating warm regions enriched in complex organic molecules. On the other hand, the presence of angular momentum and magnetic fields leads to the formation of circumstellar disks and the ejection of matter, in the form of collimated jets and wide-angle outflows. In the time-domain, accretion is most likely episodic causing sudden increases in the luminosity of the system and providing, along with the ejecta, energetic feedback to the system.
Moreover, planets form through the accretion of dust and gas within disks that surround young stellar objects. Consequently their initial composition and nature will directly relate to the structure and chemical composition of the disk at the loci of formation. When planets form is equally important as disks are observed to evolve in size and possibly mass during different phases of star formation, while there is growing evidence that planets form synchronously rather than sequentially to their host young stellar objects
In this talk will briefly review the new opportunities opened to study star and planet formation with the Herschel Space Observatory, the Atacama Large Millimeter Array (ALMA) and soon with the James Webb Space Telescope (JWST). I will focus on our involvement in Austrian and international projects and will discuss possible pathways for the development of star-formation studies. 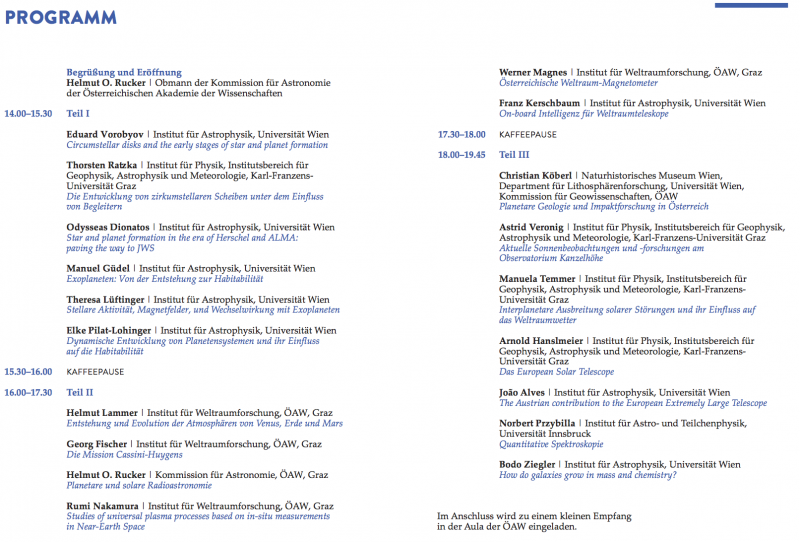