Of Sound in the Landing Page // Performance-Text

I want to work with the lecture-performance format and address issues arising from ‘Thus Spoke Zarathustra/Nietzsche as artist-philosopher.’ I am an artist and would like to work with philosophers (if possible) on this piece – asking that they work with physical matter and sounds rather than words.

Artists work with and think through ‘matter’ – something Nietzsche was sympathetic to even though he, like all philosophers, created almost exclusively through words. ‘Of Sound in the Landing Page’ – a title mimicking the style of the section headers Nietzsche employed throughout ‘Thus Spoke Zarathustra’ – will abandon words and the human voice and instead work with the ‘images of sound’ to be found in the book’s pages (for example: footsteps on the mountain path, lightening, a body falling to the ground, the sea, the howl of a dog, a wheel spinning, the flap of an eagle’s wings, teeth chattering etc.). This performance will allow the literal ‘matter’ of ‘Thus Spoke Zarathustra’ to make itself heard. Whilst the aim is to create the sounds from ‘Thus Spoke Zarathustra,’ to foreground the elemental matter held within the pages (yet silenced and repressed through words)*, I expect that the visual arrangement of doing so will also ‘speak meaningfully’ to the audience.

In order to produce these sounds, the stage will need to be set up like a “foley studio” (the place where technicians re-create the sounds originally captured on film in order to make them sound ‘believable’ – usually by using objects that have nothing to do with the local sound captured. For example, a door creak is created through rubbing a leather bag against the top of a broom stick). This means that part of the wider message of the performance will be made through the large trays of earth, gravel, stones, grasses etc. visible on stage, i.e. earthly elements. The reason I would like philosophers to create the sounds is because I think one of the important readings of ‘Of Sound in the Landing Page’ will be provided by philosophers’ hands working with elemental materials; their bodies and the ‘earth’ will be foregrounded.

The resulting performance –from the audience’s perspective- will be something in between a soundscape and avant-garde music piece (music being Nietzsche’s favored art form and without which, for him, the world seemed dead).

The role of the artist figure (myself) in the actual performance will be equivalent to a conductor. Could the term ‘conductor’ instead playfully become associated with lightening (and therefore the sound of thunder) – a much repeated and very significant sound image in ‘Thus Spoke Zarathustra’? Would the conductor in this performance need to disregard the straight line of the conductor’s baton for the circle of the “self-propelling wheel?” (Nietzsche’s demand that one must first create “a first motion, a self-propelling wheel – you should create a creator” is, for me, one of the most important and radical propositions that he made about the relationship between art and philosophy and how both disciplines need to answer to life).

Whereas in cinema the foley team are ‘out of view’ in “Of sound in the Landing Page’ it is key that the philosophers, now standing as the ‘creative production team’ of the performance and handling elemental materials, are in full view.

Above: Foley artists at work using earth and bricks to mimic the sounds of walking and thunder.

There will be powerful microphones near the trays/tables where the sound is being created, so that for the audience, even a tiny gesture with e.g. a stone will be loud and visceral (as it is in the movies). 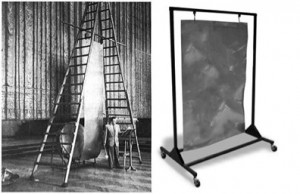 Examples of lightening sheets (these look as amazing as the noises they produce (the two ladders suggest the ‘going over’ of the ‘overman’….) 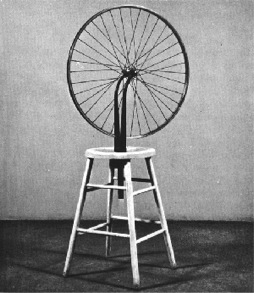 * NB: The score of elemental sounds collected from the pages of ‘Thus Spoke Zarathustra’ will not include the sounds made by human voices or humans singing or playing musical instruments. It will capture all actual sounds that occur and some of the pivotal sounds evoked through metaphor.